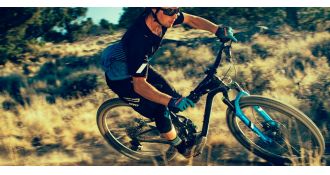 Now in its seventh generation, the 2019 Giant Trance has received one hell of an exciting revamp, the new machine features 29â€ wheels, perfect for bombing along on the trails making it sleeker and speedier than ever before.

A bike fit for XC champions

Giant have completely modernised the 2019 Tranceâ€™s geometry, largely to accommodate the larger 29-inch wheels. With 115mm of travel at the rear and 130mm in the fork, this is a bike destined for the bumpy off-roads. The angles of the frame more closely resemble those of longer travel bikes, creating a feeling of improved handling and increased stability â€“ no matter the harshness of terrain beneath the wheels.

The new Trance is designed as a 1x only bike, an increasingly popular choice from elite competition level right down to everyday trail-crunchers. Giant say eliminating the front derailleur frees up space in the rear end, increasing the tyre clearance and allowing the suspension to work just how they wanted with nothing to impede it.

The revamp of the Trance comes at the same time as a new development in Giantâ€™s off-road wheel offering. The brandâ€™s new TRX wheels (which feature on the 2019 Trance 29er) boast 30mm inner width and 28 spokes laced to DT Swiss hubs â€“ all together tipping the scales at 1662g. Giant say these new TRX wheels are a large improvement on their previous carbon mountain wheelset, improving impact resistance considerably. If you do manage to shatter a rim, then Giant are offering an impressive two-year warranty on these bad boys.

The 2019 Trance 29er boasts some fantastic new design and list of complementary kit, but it by no means is trying to replace the spot already filled by the current 27.5â€ Trance. According to MTB Category manager, Kevin Dana, the new Trance isnâ€™t intended to replace anything, rather complement it and offer even more options to a growing market of riders:

â€œOur goal was to create a bike that is fun and accessible for everyday trail riding that could handle rough, steep, fast and gnarly trails while still being able to climb well. Basically, we just wanted to make an awesome mountain bike."

The new Trance 29er is available in a top-end carbon framed Advanced Pro 29 0 version, all the way down to their entry-level, aluminium framed Trance 29 2. In all, there are five different build kit options.

Perhaps the most important feature of a dirt-munching XC bike is its suspension, the bike has to be able to glide over some of the roughest terrain while also offering the rider up-top a ride that is as smooth as possible. No one can guarantee a flawless, super-smooth ride over off-road terrain, but the new DVO suspension sure does come close.

The same suspension used by Giantâ€™s pro riders, DVO is one of the smoothest and most reliable that money can buy. Itâ€™s partnered by Giantâ€™s Maestro system and a trunnion mount shock providing quality suspension in the rear, perfect for isolating each pedal stroke, as well as preventing nightmarish brake jack.

While the elite DVO suspension is only found on the higher end Trance 29er bikes, Giant have by no means scrimped on the bikes in the rest of the line. Instead, Giant bring back old friends Fox and their new Float system. It isnâ€™t quite as light as the DVO suspension, but the quality of ride is almost as good.

All about the ride

The new Trance was recently ridden along the famed trail paradise of Santa Caterina, Italy, by Pinkbike. When climbing, Pinkbikeâ€™s Daniel Sapp found that the bike was very efficient at transferring the power:

â€œWith the DVO Topaz shock fully open, the Trance pedals exceptionally well. You can feel some motion, but everything is well supported and I didn't find much pedal induced bob or loss of energy happening.â€

As the trails flattened and the terrain got all the more lumpy, the Trance stayed just as efficient and soon grew into the wild lease of life routinely promised by Giantâ€™s XC mountain bikes:

The new 2019 Trance 29er is yet to hit our stores, but if youâ€™re interested in this trail blazer make sure to drop us an email to enquire about its arrival or ordering in a specific one, tailored just for you.